Sharks at Sea of Cortez: current status and conservation opportunities 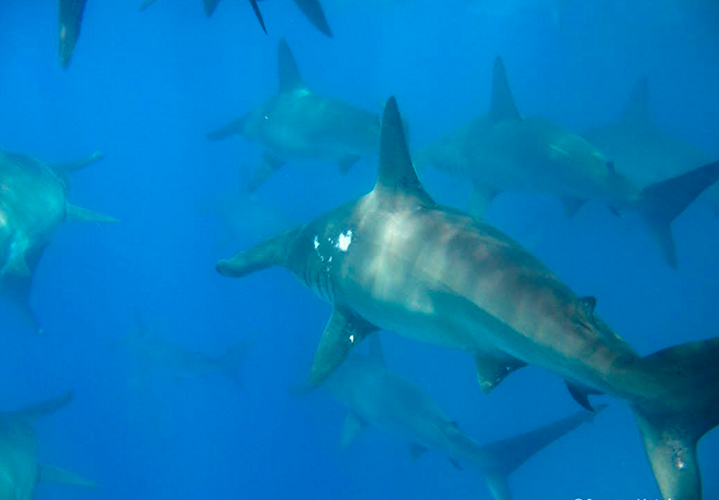 Ecologically speaking, we could consider the hammerhead shark already extinct in the Gulf of California; overfishing, decay of their natural habitat and climate change have been lethal for this charismatic marine species. However, not all is lost. Science can offer an effective solution to recover the populations of the “king of the seas” who used to inhabit the Sea of Cortez.

“Look, a toadfish!” Shouted Félix Higuera, sailor of the scuba diving boat Don José, just as I was getting ready to scuba dive at a place known as the shark alley in a small island at the Gulf of California. That morning we saw a whale shark on surface, and as I dived in the blue summer waters, I saw several more specimens some 30 meters below the surface, around a pinnacle. Then, we saw many other species such as whitecaps, red snappers, turtles and some hammerhead sharks. Further ahead, there was a school of skipjack tunas and then some 100 hammerhead sharks, just above the low south.

That was the outlook in Las Ánimas Islet back in 1994. Now a days the it is quite different, 20 years later, when scuba diving in the same location the only thing we can observe is an almost lifeless rocky bottom, only small fish can be spotted. No sharks. We can tell the same story about El Bajo de Espíritu Santo (underwater mountain), which in the 90s had plenty of tuna and hammerhead shark swimming in spirals of up to 100 specimens.

Nowadays there is little or nothing left of this abundant marine life. The common hammerhead shark (Sphyrna lewini) was also abundant in many other underwater mountains in the Gulf of California. During the 70s and 80s schools could reach up to as many as 300 specimens. Today, the presence of this species is so low it can be considered extinct in this sea.

The abundance of sharks and other marine species varies from generation to generation (shifting baselines), and it becomes evident because in what us, human beings, observe in the nature that surrounds us.

The main threats for sharks in this region are overfishing, decay of their natural habitat and climate change. Overfishing and the lack of management of some areas have caused the collapse of shark populations in the last few years, particularly those species who come close to the shores as they frequently get captured, such are the cases of the blacktip shark and the hammerhead shark.

Equally, those species who swim away from the shores and are associated to islands or underwater mountains are highly vulnerable to industrial fishing.

The common hammerhead shark is of very high value to the fishing industry in Mexico because of its fins and also as a resource for ecotourism in places such as the Revillagigedo National Park, and historically in Bajo de Espíritu Santo and Las Ánimas. However, this species is not protected in our country and there are no management plans or other conservation tools in place to protect it; internationally it is considered as Endangered (refer to the iucn list). The only measure in place is the annual closed season during the months of May, June and July implemented by CONAPESCA in 2012.

One of the most critical problems of this situation is that when the populations of top predators decrease so dramatically, these are replaced by smaller predators (meso predators) such as rays, dogfish sharks and squid, which can become so abundant that they decimate their prey populations (small fish or invertebrates), causing an unbalance in marine ecosystems.

This is known as trophic cascade. An example of this was observed in the Gulf of California with the almost extinction of the hammerhead shark in the late 90s, which coincided with the super abundance of jumbo squids, which consume large quantities of pelagic red crab, other meso pelagic fish and sardines, and the arrival of a new top predator: the sperm whale.

The deterioration level of places like Las Ánimas and El Bajo de Espíritu Santo really stands out, especially considering the importance they had for scuba diving, sportfishing and commercial fishing since the 70s up until the first decade of the new millennium. There was a time in which these sites were the best places in the world to scuba dive, with numerous schools of hammerhead sharks, which attracted world famous marine filmmakers like Howard Hall, and also renown scientists like Peter Klimley or Sylvia Earle,
who remembers that in her first scuba diving expedition in Las Ánimas back 1965 there were “as many hammerheads as stars in the sky”.

It could well be said that the abundance of hammerhead sharks was the beating heart of the tourism industry in La Paz (Baja California Sur) during the 80’s and 90’, when many ecotourism companies offered scuba diving expeditions to Las Ánimas and El Bajo de Espíritu Santo to observe the schools of hammerhead sharks. It is appalling that sharks have disappeared from these sites.

This was one of the made reasons that motivated me to found Pelagios Kakunjá in 2010, together with my friend and colleague Mauricio Hoyos. We are a not for profit organization whose efforts are dedicated to the study and conservation of the ray and shark species in Mexico, many of which are threatened or endangered on a global scale. One of our goals was to generate technical information for the regional management of the species and the implementation of conservation strategies for these species in Mexico.

A few years later, with the results from our research, we were able to contribute to the declaration of the Revillagigedo Islands as UNESCO World Heritage and to the expansion of the marine reserve. The research on shark and ray movements by Pelagios Kakunjá —together with Pacific Manta Research Group and MigraMar— was a key element for UNESCO to recommend the Mexican government in 2016 the expansion of the area of the Islands’ Marine Reserve from 6 to 12 nautical miles.

Furthermore, we supported the CONANP with crucial scientific information for the
Justification Study prior to the declaration of the Revillagigedo National Park and, we proposed the creation of a larger and more effective marine reserve to protect sharks, rays and other vulnerable migratory species in the Mexican Pacific.
The culmination of our efforts came in November 2017, when the Revillagigedo Islands became the largest National Park in North America with an area of 148,000 km2. This proves that technical information derived from scientific research is of great value for the creation and implementation of effective marine conservation programs.

We can definitely say that not all is lost for the Gulf of California. The implementation of the closed season for sharks which started in 2012 has begun to show signs of recovery in the populations in Las Ánimas and El Bajo de Espíritu Santo, where we have recently spotted small schools of hammerhead sharks and other species such as silky shark and tuna. This means that if more effective management tools are used, like the creation of protected marine areas, we could recover the shark populations, and with this, the pelagic systems in the south of the Gulf of California.