Why is important to create a Biosphere Reserve at the Sea of Cortez and the South Californian Pacific? 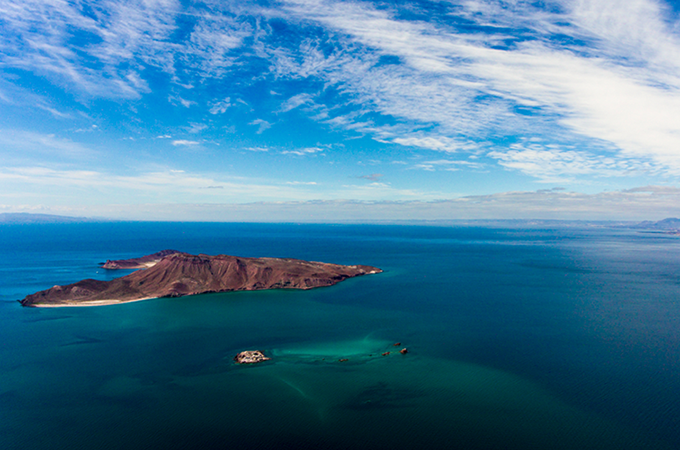 The Coalition for the Defense of the Seas (CODEMAR) —of which I am a founding member— recommends the creation of a Protected Marine Area of over 19 million hectares in the in the waters of Baja California Sur; if not done swiftly, the “Aquarium of the World” (as Jacques Cousteau christened it) could potentially turn into a marine graveyard as a result of the devastation caused by the fishing industry.

The Sea of Cortez started attracting the conservationist community in the 70s, when the Alto Golfo de California (between Baja California and Sonora) started facing the imminent extinction of the porpoise, which got trapped in the nets of fishermen searching for totoaba; instead of trying to resolve the problem from the root cause, the focus was put on short-term solutions that of course did not tackle the underlying issues.

Since then, different governments suggested that the answer relied on the creation of Marine Protected Areas (MPA), but were oblivious to one of the region’s key players, the artisanal fishermen. By not making them part of the equation, it is now clear why such a bitter issue has not been resolved.

Decades on, we observe how this situation has taken over the entire Sea of Cortez, where most of the fishing gear that has been put in place for the sustainable management of the region has been useless; we are running out of options and before something terrible happens, we are suggesting the creation of a Biosphere Reserve to regulate the activities in the area and achieve a real sustainability, taking into account the fishing communities which have historic rights over these waters.

It is key to realize that the fishing industry in Mexico has always operated at their leisure, leading many species to commercial extinction, to say the least. For example, fishermen from Yucatan and Campeche fish in the waters of Quintana Roo and fishermen from Sinaloa and Sonora operate in Baja California Sur; this situation cannot continue, it is time to grant exclusive rights over their waters to the local fishermen and empower them to guarantee their livelihoods and make them responsible for the health of the ecosystems.

For the specific case of the Sea of Cortez, it is really worrying to observe how outsiders come to the coasts of Baja California Sur —where there is not an industrial fishing fleet— to fish, and all because they have overexploited their own waters and the abundant life that once existed there no longer does, and it is not profitable to fish there anymore. This is undoubtedly unfair competition because there is nothing a local fisherman can do to stop the huge industrial fishing boats that devastate what little there is left in the area.

One of the main attractions for the fishing industry at the Sea of Cortez is sardine capture; it is shocking to see how this practice is “certified” as “sustainable” by the Marine Stewardship Council (international organization), given that this fishery destines 65% of its capture to the production of flours and oils mainly used in aquaculture in Mexico (1 kilogram of flour requires 6 kilograms of fresh sardine). Furthermore, 10% of the capture is frozen and used as bait, and barely 24% of the capture is canned and used for human consumption. It is laughable to think that sardine fishing is considered sustainable.

Even worse, the United States and Canada banned sardine capture since 2015 because of the collapse of its populations, which they share with Mexico as well. And even in the light of this, CONAPESCA is still granting fishing permissions and authorizing its capture.

Based on science, sardine serves as food for other species such as tuna, shark, dolphin, whale, orca, sea lion, birds and all the sport fishing fish like marlin, swordfish and sailfish. This explains why it is no longer possible to observe the abundance of life that Cousteau once saw at the Sea of Cortez.

It is key to confirm that it is totally untrue that the Biosphere Reserve at the Gulf of California, with over 8 million hectares, contemplates a total fishing ban; the protected area CODEMAR is encouraging to protect is only one third of the 24 million hectares the Sea of Cortez covers.

Besides, it would only apply to the waters of Baja California Sur which, as I mentioned before, does not have an industrial fishing fleet and fortunately, is still densely populated with various marine species.

Given the above, industrial fishing will not have restrictions in Sonora, Sinaloa or Baja California Norte; industrial fishermen in these three states will be able to continue with their activities in their own waters, where they will have to reorganize their fishing efforts, which implies no job losses, on the contrary, there will be more jobs connected to tourism; this is all about a productive reconversion, as it normally occurs in open and dynamic economies.

The Biosphere Reserve at the Sea of Cortez and the South Californian Pacific is the best option to guarantee our long-term food supply, currently at risk thanks to industrial fishing companies which are decimating the fish populations in the region; fisheries in the area are collapsed, up to 80% in some areas. 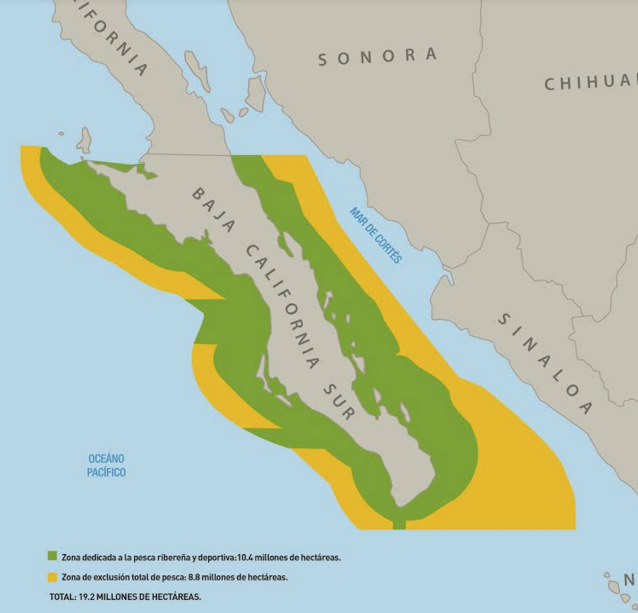 For the artisanal fishermen

Those who better look after the sea are those who live by the sea; they know all about fish movements, sea currents, breeding seasons, tides, nutrients, fish populations and fish sizes… I am taking about the local or traditional fishermen, an almost extinct breed.

They are the ones who put food on our table, live with the minimum and are the most affected by a monster whose voracity in insatiable —the fishing industry— which day by day takes more of what used to belong to the local fishermen.

The fishing industry possesses sophisticated vessels which, in a very short time, capture an entire school of any fish, while traditional fishermen use a fishing rod and capture one fish at a time. The former extracts tons of fish, while the latter barely a few selected kilograms.

Local fishermen only capture full grown adult specimens or mature adults of a certain size, while industrial fleets extract everything, including young specimens which have not even reached breeding maturity.

The CODEMAR recommends Baja California Sur to be surrounded by a Biosphere
Reserve from the coast and 50 nautical miles (almost 95 kilometers) into the ocean, with an exclusion area for vessels over 10.5 meters long with refrigeration equipment. This reserve also contemplates a buffer zone for local fishermen, where they can carry out their traditional activities as they have done for centuries, in the waters where they were born.

The state of Baja California Sur has as much, or even more, potential in terms of tourism as the Yucatan Peninsula. This is a very interesting challenge for the administration of Andrés Manuel López Obrador as well as for the state governor, Víctor Castro: turn this state into a world-class pole of development in terms of conservation tourism. The opportunity is there.

In Mexico exists an ancestral malpractice for fishermen to invade neighboring waters, thinking “before my neighbor takes it all” … It is instrumental that for the first time in history, the sole users of the waters are the inhabitants of that particular coast.

The Biosphere Reserve at the Sea of Cortez and the South Californian Pacific has its legal foundation on Article 48 of the General Law of Ecological Equilibrium and Environmental Protection, which states that locals should have priority on the surrounding waters over outsiders.

The beneficiaries of these waters should be the local fishermen, who will now have the opportunity to reconvert their productive fishing activities and link them to the thriving tourism industry in the region, while industrial fishing companies will have to start planning where to redirect their fishing efforts, which does not necessarily imply job losses.

It is time to use the region’s governance to create wider-scope, assertive instruments for the benefit of local fishermen, beyond the authorities that solely favor the fishing industry, which by the way will now have to reconsider their business strategy.